Imagine the SNP Government in Scotland demanding  that contracts on;y went to firms that supported increased powers let alone Independence.
There would be a public outcry and Unionist would be frothing out the mouth
However  it seems that the UK government  seem to be assuring that contractors bidding for work with the government are being asked to affirm that they back Brexit.
According to the Guardian

Liam Fox’s Department for International Trade (DIT) has inserted a clause into advertisements inviting tech companies to bid for work, saying that in order to have the right “cultural fit” for the task, they must “be committed to the best possible outcome for the United Kingdom following its departure from the European Union”.
Pro-Brexit ministers have sometimes been frustrated by civil servants’ lack of enthusiasm for the complex task of unpicking Britain’s close relationship with the EU and appear to be determined to hire firms that share their optimism.

Last December, contractor Deloitte apologised after details of a damning report it had written about Downing Street’s plans for handling the article 50 process were leaked.

The company also agreed to pull out of bidding for government contracts for six months.
The Liberal Democrat leader, Tim Farron, said: 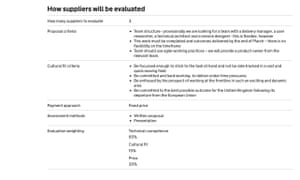 “The Conservative Brexit government demanding there must be a ‘cultural fit’ is straight out of the pages of Nineteen Eighty-Four.
“The private opinions of government employees have always been their own business. Now they are required to support Brexit, will they have to support the Tories too?”

“Professionals will always strive for the best outcomes in their work without being told how they should and shouldn’t think.”


When done carefully, selecting new workers this way can make organizations more productive and profitable. But cultural fit has morphed into a far more nebulous and potentially dangerous concept. It has shifted from systematic analysis of who will thrive in a given workplace to snap judgments by managers about who they’d rather hang out with. In the process, fit has become a catchall used to justify hiring people who are similar to decision makers and rejecting people who are not.


We used to call it employing Yes Men.

Would anybody gaining such a contract seriously try to undermine Brexit as the government seem to be suggesting?

In any Job you need people who are enthusiastic for carrying out their mandate.

There are times in any project when those actually doing the work need to tell those giving the orders .


"Look this is not going to work this way and I have a idea which will but it may lead to a different outcome than the one you originally wanted.


Margaret Thatcher used to ask "Is he one of us?" promotion to a backbencher.

Mrs May seems to have extended it to everybody employed in any capacity as far as Brexit is concerned.