With just over a week to go (August 5th)  The latest polls from Quebec has seen a slight swing to  Parti Quebecois as Liberal voter seem to be switching to Coalition Avenir Québec. According to Poling Analysts ThreeHundredEight. 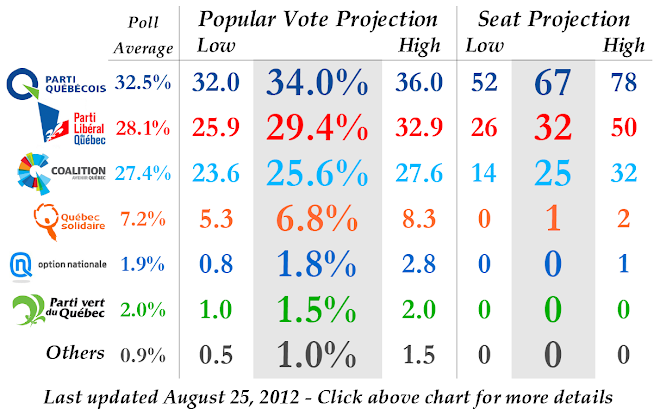 The polls also seem to indicate  that Liberla leader  and Current  Quebec  Premier  Jean Charest. could lose in his riding of Shebrooke.

The latest poll would see Parti Qubecois  Pauline_Marois gaining a majority in the Assemblée Nationale .but it still to close to call and there's still  time for a major shift.

There is however a clear  possibility of Quebec Solidare  gaining an additional seat after a strong showing in the leaders debate by Co-leader  Françoise David which may boost her campaign in the riding of Gouin. a neighbour seat of her co-leader Amir Khan pf Mercier which he won last time.

There still a possibility  of QS holding the balance of power and if Maoris wants another referendum this may be her only option..